skip to main | skip to sidebar

OK, so I'm gonna start by putting up all the old releases starting with the first release we put out - WA Decay...Noise From Across the Desert. (LFDD001). 500 CDs pressed. SOLD OUT. 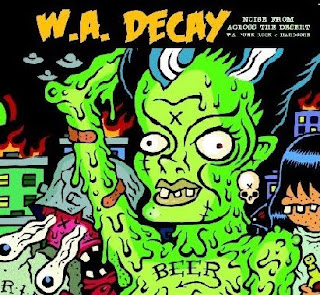 This CD was released back in mid to late 2007. We decided to release this CD as a bit of a collection of all the rad Western Australian punk bands that were either still playing or had played in the last 5 or so years. Came up with 29 tracks that covers a pretty broad spectrum of the punk genre; from hardcore to streetpunk to garage to rockabilly. Tracklist is as follows:
Here is the press release we sent out:

“Two scumbags got together and decided that they wanted to create a compilation CD of recent Punk, Rock and Hardcore tunes from Western Australian bands. After a shitload of fucking around asking bands for songs, sorting out artwork and deciding on a track listing (a lot harder than was imagined) they have produced "WA Decay... Noise from Across the Desert!" A compilation of 29 WA bands that will make you cry, make you bleed, make you smash stuff and possibly make you die.”

So yeah anyway, from humble beginnings and all that...

The CD is now sold out, I have been contemplating putting all the Sold Out stuff from our label up for download at some point so i guess if anyone is interested let me know. And if any band on the CD has a problem with their stuff being made free to download let me know as well.

Posted by Live Fast Die Drunk Records at 10:19 AM